The bar chart shows the number (in thousands) of men and women in further education in Britain in three periods and whether they were studying full-time or part-time.

Summarise the information by selecting and reporting main features and make comparisons where relevant. 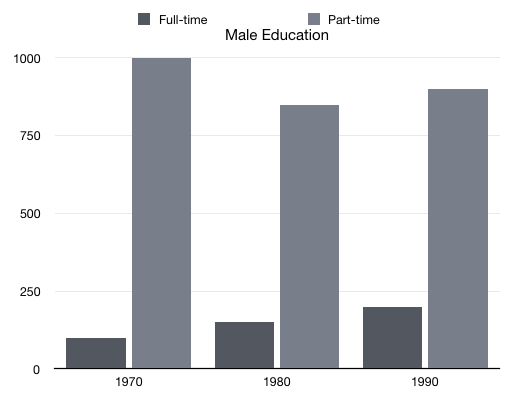 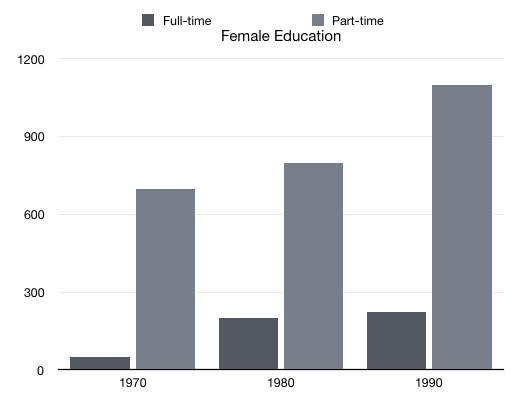 The bar chart illustrates the number of British males and females presented in thousands (no need to state the units) who were doing were engaged in further educational studies (education = studies) either as full-time or part-time in three distinct periods. (Prefer simple past tense instead of past continuous.)

Overall, the trend of full-time education was much less than part-time on both men and women sides all over the period of the survey. (this is not a trend. Overall, a disproportionately large number of students were engaged in full-time studies than in part-time studies during the given period.)

In terms of With regard to part-time education, initially in 1970/ 71 more males tended to be involved (around 1000 thousand) in comparison to less than 800 thousand in females’ side. 10 years later, the number of males and females was almost similar reaching 800 thousand. While in 1990/ 91 a sharp increase in women number sharing in part-time education reaching 1100 thousand while only 900 thousand men took part in same period more women engaged in education as compared to men. (You’ve got a LOT of information to cover and very little time. Focus on main features and comparisons only. No need to state numbers.)

Turning to fulltime education, the number of individuals sharing all men and women increased over the period of the survey was increasing (prefer Simple past tense) (You can’t simply state the increase. Mention the NATURE of increase. Mention the MAIN features. This is incomplete analysis. While the number of men engaged in full-time education increased consistently during the given decades, the number of females rose sharply from 1970 to 1980 and marginally from 1980 to 1990.).

Less Fewer (less is an uncountable adjective and women are countable) women were involved in 1970/71 (around 50 thousand) in comparison to 100 thousand men in the same period. The number was increasing increased steadily among men to reach around 200 thousand in 1990/91. On the other hand, a sharp rise in females number took place to reach 200 thousand in 1980/81 with minimal increase in the 10 yeas after. (NOTE: Your paragraph is a mixture of COMPARISON and MAIN TRENDS. Do not mix them. Please follow the clear structure mentioned below. Please note that organised content is always preferred in the IELTS exam.)

Paragraph 3: Compares males with males in both educations.

Paragraph 4: Compare females and females in both educations.

Contact me for writing polished and effective Statement of Purpose.