The chart shows the number of mobile phones and landlines per 100 people in selected countries.

Write a report for a university lecturer describing the information given. 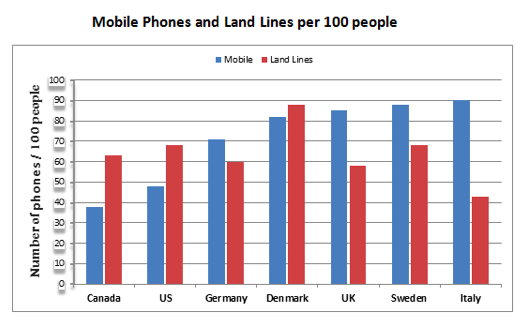 The bar diagram illustrates the differences (difference is your interpretation. Not what the question states. Please stick to NUMBER of people only. Express the major differences in body paragraphs.) between the use of cell phones and landlines per 100 people in seven countries; Canada, US, Germany, Denmark, UK, Sweden and Italy.

Overall, the use of mobiles is higher than that of landlines in 4 out of 7 countries. Mobile users are the highest in Italy and the lowest in Canada whereas landline users are maximum in Denmark and minimum in Italy. (X higher than Y construction)

The use of landlines are more popular in three countries; Canada, US, and Denmark. The graph of US and Canada are quite similar with landline users being just under 70 and just over 60 per 100 people respectively and mobile users at just under 50 and under 40 respectively. (You’re merely stating numbers. The examiner wants trends, main features, main comparisons.) However, in Denmark, the landline users are almost 90 per 100 people which is the highest of all the studied nations. Also, the mobile users are just over 80 per hundred which is higher than the other two nations. (Need to change the structure. Watch the video.)

Meanwhile, in rest of the four countries, mobile users are more with Italy having 90 per 100 people which is the greatest number. The other two countries, Sweden and UK, also have comparable mobile users with the numbers standing at about 88 and about 85 per 100 people respectively. (I can see more numbers and fewer comparisons.)

Contact me for writing polished and effective Statement of Purpose.